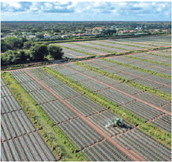 Land-swap is pitched as win-win

Developer would benefit, but county should, too
~ Mike Diamond Special to Palm Beach Post USA TODAY NETWORK
The GL Homes’ land swap with the county could be a windfall for the homebuilder. But, according to GL Homes, taxpayers would benefit too as the new homes proposed for its west of Boca Raton site could increase the county’s tax base by a half billion dollars.
That could translate into $10 million a year in annual tax revenue. At issue, though, is whether that money will be enough to pay for the increased cost of providing services to the new homeowners.
The homebuilder is looking to build 1,250 more homes in the Ag Reserve on a 683-tract known as the Hyder West parcel. One project would include 1,000 at market retirement homes; the other would include 250 workforce housing units.
GL Homes would give the county 1,600 acres of land in Indian Trails Grove in the Acreage in exchange for being ableto build on the much smaller Hyder West parcel. The homes that it would build in Indian Trails Grove would instead be built west of Boca Raton. But major rule changes are needed for the project to happen. GL Homes wants to change the rule that says it can only preserve land within the Ag Reserve to increase the density of developments there. Indian Trails Grove is more than 10 miles outside the Ag Reserve’s northern boundary. GL Homes is currently barred from building west of State Road 7, which is where the Hyder West parcel is located. It is north of the Stonebridge County Club. Property west of Boca Raton is valuable.
So why is GL Homes willing to give up so much more land to build in the Ag Reserve?
Because the homes it builds west of Boca Raton on the Hyder West parcel would sell for far more than the homes it would build in the Acreage area. The 1,000 at-market, retirement homes are each expected to sell for more than $1 million, generating total sales revenues of more than $1 billion. Many of the homes at Valencia Sound off Lyons Road, an active GL Homes’ retirement community that is close to selling out, already sell for more than $1 million. Valencia Shores, a 20-year-old GL Homes’ development west of Lake Worth Beach, has about the same number of homes as what is proposed for the Hyder West parcel. Valencia Shores’ market value is $425 million, according to the county appraiser. GL Homes walked away from a land swap proposal four years ago after it became apparent it did not have the support of a majority of county commissioners.
So why is it reviving the plan now?
From a financial standpoint, it makes even more sense to pursue it today.
The GL Homes’ tract at Indian Trails Grove is near Arden, a large development in the northwest part of the county. While sales have been brisk, sale prices rarely exceed $500,000.
What is the impact on area’s infrastructure?
Drew Martin of the Sierra Club called the project a very good deal for GL Homes but a very bad deal for Palm Beach County. He noted that it will have “a significant impact on infrastructure,” noting that State Road 7 is either at or near capacity. More public safety personnel will need to be hired, more road improvements will have to be undertaken and additional students will go to county schools, wiping out whatever financial benefit there would have been for the county. And Martin said the project could also adversely impact the nearby Loxahatchee National Wildlife Refuge.
The American Farmland Trust (AFT), a non-profit that promotes agriculture preservation, maintains that agriculture requires “little public infrastructure” and because of that, it actually generates more public revenues than they receive back in public services.
“Converting agriculture land to residential land use should not be seen as a way to balance local budgets,” according to AFT. County Commissioner David Kerner, a critic of the land-swap plan, said he is hopeful that the boost in the tax base will not be a factor in whether the plan is ultimately approved.
“We could just fill every square inch of the county with homes,” he said. “That would not make for good public policy.” Kerner said the issue is whether GL Homes should be able to go outside the Ag Reserve to preserve land and then use that preservation to increase density in an Ag Reserve development. “To me, it is a non-starter,” he told The Post.

“We told people that this land would forever be preserved and not be developed. Now we are looking at changing all that.” Commissioner Melissa McKinlay, however, said the county would be “foolish” not to consider the proposal. She said the market value of the GL Homes’ land at Indian Trails Grove is probably more than $90 million. “The days of local governments seeing land contributions of this magnitude are fading,” she said, noting that there are “a great deal of environmental benefits” by using land at Indian Trails Grove for water resource projects that will recharge wells, provide water to Grassy Waters and clean water before it flows into the Lake Worth Lagoon.
Dimes706@gmail.com
The 683-acre Hyder West parcel is farmland west of State Road 7 and borders the Stonebridge Country Club, top, west of Boca Raton on Dec. 15.
GREG LOVETT/PALM BEACH POST
* * * * * * * * * * * * * * * * * * * * * * * * * * * * *
Category : Community Redevelopment Agency Issues
PreviousDrew Martin discussing Lake Worth Beach CC3 – pool repair
NextRAP MUSIC VIDEO BLASTS BIG SUGAR